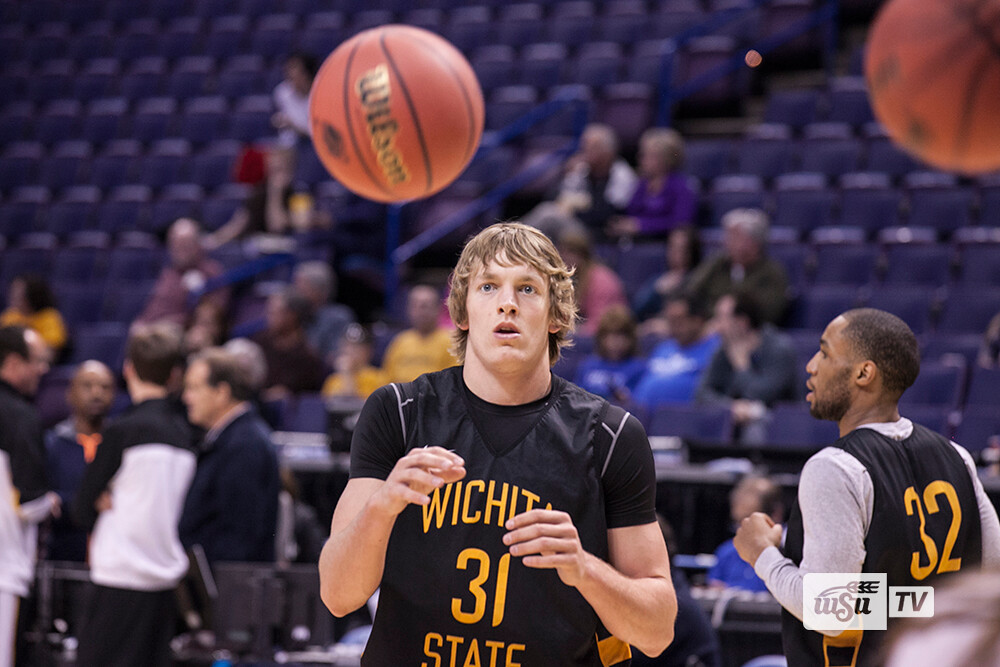 Welcome to the first edition of our new segment, “Inside The Enemy’s Ship”! This is a new type of article that we are planning on (hopefully) doing every week for the remainder of the season. Essentially, we are talking to members of the opposing school to get a better idea of what they think about our school and our upcoming match-up! We couldn’t think of a better school to start of this segment then Wichita State, which is likely Seton Hall’s most notable non-conference home game during Kevin Willard’s tenure. After last years beating 77-68 beating that Seton Hall suffered in Wichita.

We had the pleasure of talking to Evan Pflugradt, one of the sports writers for The Sunflower, Wichita State’s Student newspaper. He was kind enough to take some time during finals week to talk to us. While I wasn’t able to record the whole phone interview (which was undeniably some of the most fun that we’ve had here at BlueBeardArmy in quite some time), below is a rough transcript of what transpired.

BBA: When the season started, where did you see the Shockers season going?

PFLUGRADT: Expectations were to win the MVC regular season champions. Whether or not they win the MVC Conference tournament is a true test, the Shockers have struggled with it in the past because of limited rest between games. They have a standing recognition of winning with amazing scouting reports. Executing those scouting reports is a challenge when you are limited on time between games. Plus, there is usually always a surprise in the Valley.

BBA: What was your reaction to the first loss of the season?

PFLUGRADT: I actually predicted the first loss of the season to Tulsa. Tulsa is the most veteran team in the nation. They returned all five starters. They are made up of nine seniors, five juniors and two freshman. That’s tough to beat a veteran team like that, especially when you’re on the road without your All-American point guard not 100 percent when we didn’t realize it, and continued to play him. Playing VanVleet handicapped us more in that loss.

BBA: Did you ever imagine a situation where WSU was not ranked this season?

PFLUGRADT: In the preseason I actually thought WSU was better than a couple of the teams in the AP Top 10. Yet, the had not done anything yet to show they were worthy of that ranking. They held a streak of 42 weeks, the third longest active in the NCAA, before they fell out after Orlando.

What you have to realize is not only did VanVleet go out, but stand out freshman Landry Shamet, a combo-guard was slated as the backup for VanVleet when he would sit out. Shamet did not make the trip to Orlando with an injury to his left foot, he would have surgery the day before the trip.

With Conner Frankamp still ineligible at the time the Shockers had little to nothing left.

Baker was running the point and Ty Taylor was in at SG. Baker playing out of position was awful, he’s proven he can run the point, but he’s better as an off-guard.

Taylor put up some awful, awful shooting percentage numbers in Orlando, and on the season as a whole he has struggled. Coach said he is deserving of 6-8 minutes per game. In Orlando he posted over 30 and it is not a winning formula.

If I look at the team without three of their four leading scorers (VanVleet, Grady and Shamet) I don’t think it matters if it is Wichita State or anybody in the AP Top 25. I think you take away that much from any team and they fall out of the Top 25 when you’re playing that kind of competition.

So no, initially I didn’t foresee this a possibility, but given the circumstances I think it makes sense.

BBA: Before this game appeared on your schedule, have you ever heard of Seton Hall University?

PFLUGRADT: I have attended a majority of KU games in Lawrence, I believe Seton Hall has traveled to play there a few times in the last few seasons. I don’t recall much about them.

BBA: Which player should the Seton Hall Pirates be the most worried about meeting on the court? Why?

Frankamp was rated the No. 50 player in the class when he was recruited.
Frankamp made his debut on Wednesday waiting out a transfer eligibility requirement. In his first game he was 0-5 shooting and scored two points. On Saturday he struggled once again, yet he hit his first field goal with 54 seconds left against Utah hitting a two-point jump shot over a 6’6 defender just beating the shot-clock buzzer. He followed it up on the very next possession with a cross-over resulting in a three-point basket. Frankamp can score and is the best shooter on the team, hands down. His release is quicker than ever. He scored the last five points of the game against Utah and he’s finally built some confidence against quality competition for the first time since 2014. When he’s confident he won’t miss much at all. He’s do for a breakout game at any point in time. He will get good minutes. Will probably play 15 minutes, more if he is hitting shots.

The second (is) Markis McDuffie

McDuffie was benched in the loss versus Tulsa. In the games since he has been fired up. One of the most skilled players this team has ever seen. He’s consistent and he’s been amazing himself recently with some shots. Pure athleticism and natural shooter. The best kept secret for the Shockers.

There you have it! A big thanks to Evan, a truly gifted journalist, for taking the time to talk to us! He can be found on Twitter @EvPflu. The Seton Hall Pirates take on the Shockers at the Prudential Center tomorrow at noon. As always, Hazard Zet Forward, and let’s go Pirates!