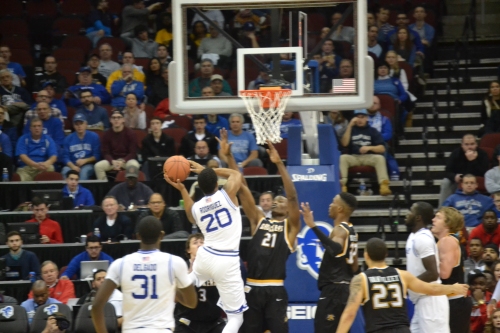 The Seton Hall Pirates opened Big East play against the Marquette Golden Eagles. Prior to this game we had the privilege of talking to Jack Goods. Jack provided us with some great info. You can see his answers to our questions in our previous post. Jack told us some things to watch for and really helped us with our research on the Marquette Golden Eagles. Jack told us to watch for Luke Fischer and Henry Ellenson, the two big men for Marquette. He anticipated that Marquette would try and get the ball in their hands as much as possible and he was definitely right. After a tight start to the game, the Pirates came out with an 83-63 victory.

The first half was a very closely contested affair. The Pirates led for most of the half but never built a solid lead. After a pair of free throws by Desi Rodriguez, the Pirates led by 11, which was their largest lead of the first half with 14:42 to go. Haanif Cheatham and Jajuan Johnson helped Marquette cut into the lead and eventually they would take a 1 point lead into halftime. At the break the Golden Eagles led the Hall 40-39.

The Golden Eagles got a huge first half from freshman Haanif Cheatham. He led Marquette with 15 points and 2 steals. He helped cut into the lead and eventually give Marquette the lead. Henry Ellenson had a monster half on the boards as he grabbed 10 rebounds. The freshman has really been a huge player for Marquette this year. Jack Goods told us that Ellenson has generated the most noise at Marquette since Dwyane Wade. He told us that Ellenson has done it all and he is still finding his way. He will continue to get better and the rest of the Big East should be on watch. Jack proved to be quite accurate when saying Marquette should work the ball through Fischer and Ellenson. Marquette was 0-6 from 3 in the 1st half.

The Pirates were led in the first half by Desi Rodriguez with 14 points. Isaiah Whitehead added 11 points, and Khadeen Carrington chipped in 6 rebounds. Ismael Sanogo added 5 rebounds for the Hall and played stellar defense on Henry Ellenson.

The second half was all Pirates. Seton Hall wasted little time in reclaiming the lead, and then took over in the second half to dominate the Golden Eagles. With 7:39 remaining in the game, Duane Wilson hit two free throws to cut the lead to 9. From there the Pirates went on a 14-3 run to pull away for good. The Pirates played a great game despite committing 20 turnovers on the night. Ismael Sanogo and Khadeen Carrington had big dunks in the 2nd half. Isaiah Whitehead distributed the ball well, and the Pirates cruised to an 83-63 win.

Marquette was led by Haanif Cheatham with 17 points. Freshman Henry Ellenson posted 13 points and 14 rebounds. He is a force to be reckoned with in the Big East. Luke Fischer added 12 points, 9 rebounds, and 3 blocks. Marquette was ice cold in the second half as they only put up 23 points.

With the loss the Golden Eagles drop to 10-3 on the year and 0-1 in Big East play. The loss snaps the 9 game winning streak for Marquette. With the win the Pirates improve to 11-2 on the season and 1-0 in the Big East. Marquette will head to Washington D.C. to take on Georgetown on Saturday. The Pirates will head home to take on DePaul on Saturday.

Big thanks again to Jack Goods for all his help. He is a tremendous journalist and a great person to follow on twitter. He can be found at @GoodsOnSports. He also writes for the Marquette Tribune. Thank you again Jack!

Check out the PPI below to see which Pirates players shined in the Big East opener. We will have full coverage of the DePaul game on Saturday. Until then, Hazard Zet Forward.